Mitsubishi Heavy Industries, LTD. (MHI), a large shipbuilder / manufacturer, in Japan first entered the field of aviation in 1921 at a location adjacent to the seaport in Nagoya. By the time the MU-2 went out of production in 1986, MHI had manufactured over 30,000 aircraft and over 100 different types.

From the ground up, the MU-2 airplane was designed to be powered by a turbo propeller engine. Most manufacturers of the time started with an airplane for reciprocating engines and then, later, would hang turboprop engines on their aircraft.

Surveys taken during the 1950's indicated that the U.S. corporate aviation market had a need for fast, economical aircraft with short field landing capability. To achieve these requirements, MHI designed an aircraft to operate with the latest state-of-the-art, highly reliable turboprop engines. The turboprop engines provide not only the speed requirements, but also, the capability of continued economical horsepower efficiency at higher altitudes. In order to achieve the short field takeoff and landing capability for the aircraft, a highly efficient double slotted Fowler flap was chosen and designed to run the full span of the wing. A spoiler system was utilized for roll control instead of ailerons, thereby permitting the full wing flap. Use of spoilers for roll control was the latest state-of-the-art and has many advantages over typical ailerons for roll control. One advantage of spoilers over ailerons is the retention of positive roll control even during slow flight, a realm in which ailerons become sluggish, heavy, and are much less effective. Spoilers are also not subject to aileron snatch. In-flight comfort in turbulent air was enhanced by utilizing higher wing loading when the airplane is in the cruise configuration (flaps retracted). Landing gear was designed to be rugged since the designers expected considerable demand to be placed on the gear when unimproved runways were utilized. Luxurious seating for seven, spacious wood grain storage cabinets, pull-out tables, and a refreshment center in a pressurized/insulated cabin were included. Ample storage was provided for baggage. Design for the MU-2 began in 1959. Four years later, the first MU-2 prototype, the MU-2A was undergoing test flights in Japan. All future production airplanes were MU-2B. The airplane made its U.S. debut as a static display during the 1964 Worlds Fair in New York City.

This part of our story begins in 1963 when Mitsubishi's New York trading company proposed a new seven place executive turboprop aircraft to Mooney aircraft based in Kerrville, Texas. Mitsubishi Heavy Industries, located in Nagoya, Japan would fabricate the new aircraft and Mooney would be responsible for assembly and marketing. Two years later in 1965, the agreement was finalized. Mooney purchased 230 acres at Mathis Field in San Angelo, Texas for the production facility. MU-2 aircraft from the MHI production line would be packaged into three mahogany plywood containers. The containers were shipped from Nagoya, Japan on board a transport ship to the U.S. mainland and then trucked to San Angelo, Texas for final assembly. Final assembly included installation of engines, propellers, avionics, instrumentation and interior. The "green" airplanes, so-called because of the green protective coating on the exterior surface, were flight tested and painted to the buyers paint scheme prior to delivery. Mooney in San Angelo consisted of twenty-five employees at the time and by December 31, 1966, five aircraft had been sold. By 1968 the final assembly of the MU-2 production line had geared up to turn out four aircraft a month. Production could barely keep up with sales. Despite this, in late 1969 Mooney Aircraft filed a petition of bankruptcy. On May 14, 1970 MHI terminated the contract with Mooney and it organized Mitsubishi Aircraft International, Inc. (MAI), a wholly owned subsidiary of MHI incorporated in the state of Texas. The early aircraft were certified in Japan by the Civil Aviation Bureau (JCAB) and then accepted by the United States FAA Pacific Region under a bilateral agreement and granted an import Type Certificate (A2PC). Later, in 1976 to assist the FAA, MAI was granted a domestic Type Certificate (A10SW). These latter aircraft were certified in San Angelo through the Southwest Region of the FAA. The data plate on the MU-2 states the certification basis for each aircraft. Marketing, executive and administrative functions were moved to Dallas, Texas in 1977. This placed management in the center of one of the world's fastest growing business and financial capitals. During the same year, MAI established a European marketing office in Brussels, Belgium.

From 1966 through 1986, MHI produced 703 aircraft of 13 different model designations. Much to the credit of the MHI design engineers, the MU-2 continued to evolve; however, the basic structure and aerodynamic configuration remained.

The prototype MU-2 was designated and the MU-2A. It had plenty of performance in its day and featured twin TurboMeca Astazu Mark II engines, 562 shp, manufactured if France, driving electrically controlled variable pitch propellers. Spoilers and full span double slotted Fowler-type flaps coupled with the engines provided excellent takeoff and landing capabilities, along with high cruising speeds. The higher wing loading accounted for the exceptional stability in turbulence. One major difference was that the "A" model did not have tip tanks. This model was never marketed to the general aviation public.

The "B" model or MU-2B, was the first aircraft sold to the public and boasted a top speed of 300 mph at 20,000 feet. This was an impressive feat for 1965. The Astazu engines were replaced with Garrett TPE 331-25AA or -25AB engines and the airplane was well stocked with U.S. manufactured electronics, interiors in other components resulting in over 70% of the aircraft being manufactured in the U.S. This model also featured 65 gallon tip tanks which provided a range of 1,150 miles with fourty-five (45) minute reserve. Stall speed "clean" was 98 mph which was reduced to 74 mph with the full 40º of flaps deployed.

The sales designated "F" model or the MU-2B-20 was perhaps one of the most popular of the MU-2 models. Two 15 gallon outer metal tanks were added to the area in the outboard wing resulting in a range increase over the "B", "D", and "DP". Gross weight was increase 570 lbs. to 9,920 lbs.

As the development of the aircraft continued, subsequent models featured product improvements, more luxurious cabins, increased pressurization, improved sound proofing and growth versions of the Garrett TPE 331 engine. When marketing surveys determined a need for a larger aircraft, the MU-2 fuselage was extended three feet forward and aft of the wing for a total extension of six feet. With high-density seating, eleven could ride comfortably. The more typical seating was for a total of eight people.

The first of the "long body" models, was the MU-2B-30 or "G" model. The first two airplanes, S/N 502 and S/N 503, were fitted with ferry tanks for a total fuel capacity of 650 gallons and flown from Nagoya, Japan, arriving at San Angelo, Texas on July 12, 1969. The distance of 6,400 miles was covered in twenty-four hours and 15 minutes. Fuel stops were made in Hokkaido, Adak, Cold Bay, Anchorage, and Seattle.

It was in this time frame that Mooney filed for bankruptcy. The company went through two receiverships; AEL (American Electronic Laboratories) and Butler Aviation. On May 14, 1970, MHI canceled the contract with Butler-Mooney and organized Mitsubishi Aircraft International, Inc. to assemble and market the MU-2.

The long body "J" model, or MU-2B-35, was certified by the FAA on March 28, 1971. The Garrett engines, TPE 331-6-251-M, produced 840 shp and were flat rated to 665 shp. The aircraft, on a standard day, could maintain 100% torque to 12,000 feet. The temperature indicating system was changed from an EGT to an ITT system and most of the "J" environmental control system changed from the AirResearch System to a Hamilton Standard System. Gross weigh increased to 10,800 lbs.

In mid 1972, the short model incorporated the same features as the "J" model and was certified as the MU-2B-25 or "K" model.

Another milestone was reached in 1975 when MAI contracted all MU-2 flight and maintenance training with FlightSafety International. Previously, MAI had conducted training programs at the factory. A domestic type certificate, A10SW, was awarded MAI on January 20, 1976 and on July 1, 1976, the production inspection certificate was approved for MAI. The MU-2 was now to be certified in the United States through the Southwest Region of the FAA under the A10SW Type Certificate. Provisions of CAR 3 with special conditions continued to provide the certification basis for the A10SW airplanes. Serial Nos. 313, 349, 652, and 661 were certified under the A10SW type certificate. These airplanes had their own AFM/POM unique to their serial number.

The long body "N" model, and the short body equivalent "P" model, were certified as the MU-2B-36A and the -26A respectively. These aircraft were the first MU-2s with production installation of the TPE 331-5-252M Garrett slow turn engines and four blade Hartzell propellers. Propeller revolutions were reduced by the engine gearbox from 2,000 rpm at 100% power to 1,591 rpm. The direction of propeller rotation changed from clockwise to counter-clockwise. The fuel controls changed from the Bendix to the Woodard FCU. All these aircraft were certified under the domestic A10SW Type Certificate. MAI offered a retrofit to replace the Bendix Fuel Control Unit with the Woodard Fuel Control Unit on the "J,K,L, and M" models. Most operators opted for this change. There are still a few Bendix FCUs in the field however.

The short body Solitaire and the long body Marquise represent the highest level of refinement of MU-2 aircraft. Designated as the MU-2b-40 and -60 respectively, the aircraft utilized the TPE 331-10-511M, 1000 shp engines, flat rated to 665 shp on the Solitaire and 715 shp for the Marquise. On a standard day, the -40 can maintain 100% torque to 16,000 feet msl while the -60 can maintain 100% torque to 12,000 msl. Fuel capacity was increased to the present 403 gallons by the capability of storing 35 gallons of fuel in each out wing integral fuel cell. A single red line (SRL) engine temperature indicating system was standard issue. The early models still utilized the Bendix M4D Autopilot Flight Director System. Later models beginning with Serial No. 430 on the Solitaire and Serial No. 779 on the Marquise were equipped with the Sperry SPZ-500 Autopilot Flight Control System. Serial Nos. 748 and 758 were retrofitted to install the SPZ-500 System at the factory. Most of the -40 and -60 models feature one-piece wings. These were the last of the MU-2s to be built.

In the designation "MU-2", the "M" stands for Mitsubishi, the "U" stands for Utility, and the 2 stands for the second design of this series. The "U" has never been more in focus than it is today with the numerous applications that current innovative operators have found for their MU-2, such as air ambulance operations, air cargo, check hauling, and as a corporate aircraft. Additionally, a substantial number of aircraft were delivered to the Japanese government for use in various public service functions.

Many years of continued service life remain for these aircraft. MHI remains steadfastly committed to safety for the MU-2 operators, to assure their aircraft are supported in the present and into the future, to insure that the best possible training is made available to the pilots of the MU-2, and in incorporating those changes in the aircraft systems as are deemed to have safety of flight implications. 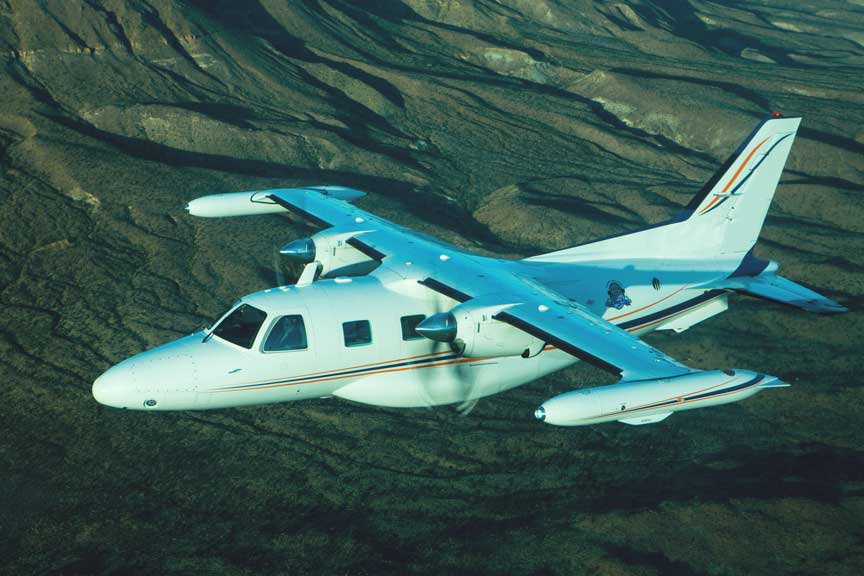